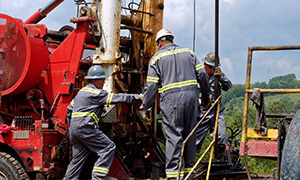 The final step in the life of an oil or gas well is shutting it off permanently, a process called plug and abandonment, or P&A. Sealing off a well protects against many environmental dangers, primarily groundwater contamination and methane emissions. However, plugging a well is a complex undertaking, and across the United States, millions of abandoned and orphaned wells are waiting for proper P&A.

Why plug a well?

An oil or gas well is usually abandoned after production declines to an unprofitable level. Or sometimes the well is simply no longer needed. When a well is not properly plugged, methane and other gases could leak for years, significantly affecting the atmosphere.

Some of the major steps in plug & abandonment include:

- Pumping cement into the well to fill the wellbore

- Removing the wellhead and any associated surface equipment

Plugging a well isolates its underground formations, ensuring they cannot “communicate” with nearby operations or travel up to the well to harm the environment.

The state of P&A in the United States

Regrettably, some wells are abandoned without plugging. The Environmental Protection Agency (EPA) estimates there are as many as 3.2 million abandoned wells in the United States—Pennsylvania alone is home to over 330,000.

A well may be left unplugged for many reasons, including owner bankruptcy or lack of necessary well documentation. In some cases, older plugged wells may require remediation using modern plugging procedures to complete the abandonment process. This can happen if a well was plugged ineffectively using rudimentary practices, such as filling the wellbore with wood.

With each project potentially costing $20,000 to $145,000, the total investment to address abandoned oil and gas wells in America sits at $435 billion. That’s a huge budget commitment. As a result, governments and contractors are constantly striving to lower the cost of P&A.

At Plants & Goodwin, we have extensive experience helping clients solve the challenges of plug & abandonment while controlling costs and maintaining high standards of safety and quality.

Proper P&A has a positive impact on the environment

A drilled oil or gas well connects volatile underground formations directly to the surface, and the longer a well is left unplugged, the greater the chance of significant environmental effects. Plugging after abandonment is essential to preventing future problems.

Here are the key environmental reasons for plugging.

Tainted groundwater devastates wildlife, livestock and nearby residents. P&A protects drinking water by closing off potential pathways between underground formations, for example, between a water aquifer and a hydrocarbon zone.

Without proper plugging, a well could leach toxins into the groundwater for decades. In Scurry County, TX, brine from abandoned wells polluted a town’s drinking water supply for over 22 years. And a 1988 report by the U.S. Geological Survey found significant chloride contamination in the groundwater near Fort Knox, KY, caused by abandoned oil and gas wells.

Groundwater toxins must be addressed, but it’s a difficult and expensive undertaking. Cleanup can cost $770 000 per year, according to the EPA, and take up to six years.

Methane is very effective at trapping heat in the atmosphere, and its unplanned release is a significant contributor to rising temperatures across the globe. In the United States alone, abandoned wells leak 281 kilotons of methane per year.

Decreasing the amount of methane released into the atmosphere can slow the rate of climate change, and plugging oil and gas wells will play a critical part in that reduction.

Unplugged, abandoned wells may be the source of health problems for nearby residents. Toxic substances from underground, such as arsenic, sulfate, benzene and chloride, can make their way above ground through an abandoned well. These dangerous subsurface materials pose health risks to residents, leading to chronic issues, such as asthma and headaches. Plug and abandonment helps to mitigate these risks.

For more than 50 years, we’ve provided turnkey plug and abandonment services for the oil and gas industry. Our extensive expertise, customer focus and commitment to safety make us the contractor of choice for dozens of clients who trust us to support their most challenging projects.

Want to learn more about the benefits of P&A? Download our guide, '5 Reasons Why Not Plugging Your Abandoned Well Today Will Cost You Tomorrow.'

An unconventional P&A project had a non-produced well with temporary plugs, leaking and unknown obstructions. See how we solved it in our case study.

Contact Plants & Goodwin to find out more about our plug & abandonment services today.